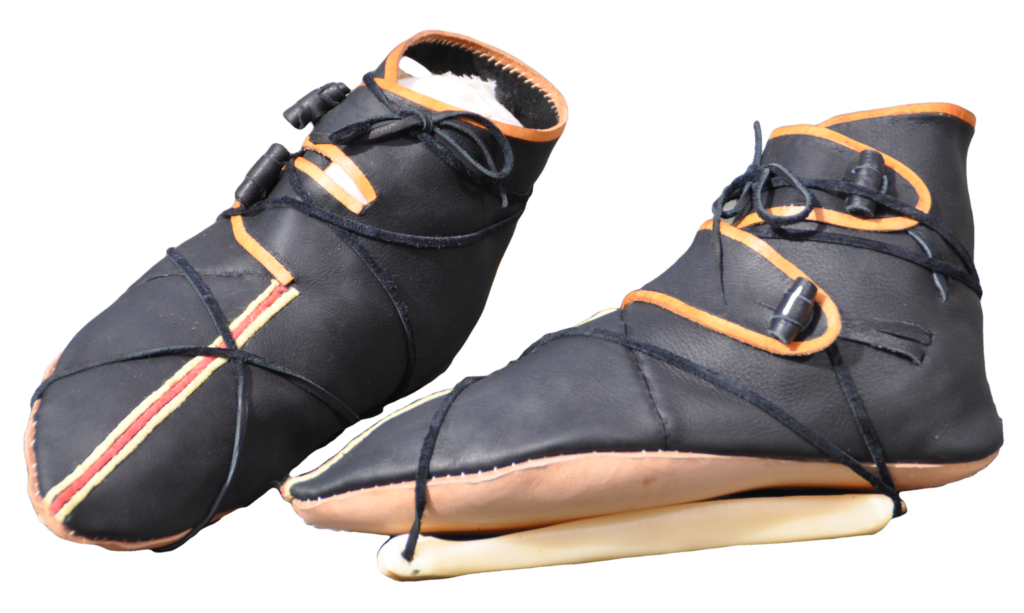 Following the creation of the page below, this project was entered into the Æthelmearc Arts & Sciences Championship, where it received the highest score.

The documentation (much more extensive than the notes on this page) can be found on Academia.edu at https://www.academia.edu/37589426/10th-Century_Embroidered_Turnshoes_on_Bone_Ice_Skates.pdf

A video of the first time on ice with the skates is at  https://www.youtube.com/watch?v=lqxlzanHsWQ

Thousands of archaeological finds of bone skates prove that people took to the ice during our period of study as well as long before and long after.

For this pair of skates, I have incorporated a pair of vamp-embroidered, 10th-century shoes based on the pattern described by Volken (Dorestad - Q, p. 373). This pair of shoes debuts the use of boar's needles to embroider, as well as topbands made of leather strips attached by edge/edge stitching.

Note that no paired shoes/skates have been found. It is assumed that any kind of period shoe will work with bone skates, but it is possible that specialized footwear was worn.

For my pair, I chose to use deer bones because they were easy to obtain on eBay. I chose to drill a hole through the front and add a peg to the rear end for bindings, because I am a novice skater. I chose to flatten both top and bottom in order to make them comfortable and stable. As for a pole, I purchased some metal cones on Amazon.com and put one on the end of a sturdy sapling.

Standing on these skates while wearing the shoes is not uncomfortable, however these bones seem too short and perhaps too frail for my 175 lbs. Deer bones may have been used mainly by youth. A pair of horse bones will be tried for comparison, and are likely to be more comfortable to stand on as well as sturdier.

Blauw, W. 2001. Van Glis tot klapschaats – Schaatsen en schaatsenmakers in Nederland, 1200 tot heden. Franeker. [Dutch or German; the early part of the book appears to be about bone skates and then early medieval wooden ones with iron blades, based on accompanying illustrations; need a translation!]

Choyke, A. M. 1999. "Bone Skates: Raw Material, Manufacturing and Use" in Pannonia and Beyond: Studies in Honor of László Barkóczi, A. Vaday, ed. (Archaeological Institute of the Hungarian Academy of Sciences, Budapest). 148-156, 651-654.

Choyke, A. M., and L. Bartosiewicz. 2005. "Skating with Horses: Continuity and Parallelism in Prehistoric Hungary" in Revue de Paléobiologie 10. 317-26.

Formenti, F., and A. Minetti. 2008. "The first humans travelling on ice: an energy-saving strategy?" in Biological Journal of the Linnean Society 93. 1–7.

Küchelmann, H. C., and P. Zidarov. 2005. "Let's Skate Together! Skating on Bones in the Past and Today" in From Hooves to Horns, from Mollusc to Mammoth: Manufacture and Use of Bone Artefacts from Prehistoric Times to the Present, Proceedings of the 4th Meeting of the ICAZ Worked Bone Research Group at Tallinn, 26th-31st August 2003, H. Luik et al., eds., Tallinn: Ajaloo Instituut. 425-45.

MacGregor, A. 1975. "Problems in the Interpretation of Microscopic Wear Patterns: The Evidence from Bone Skates" in Journal of Archaeological Science 2. 385-90.

West, B. 1982. "A Note on Bone Skates from London" in Transactions of the London and Middlesex Archaeological Society 33. 303.