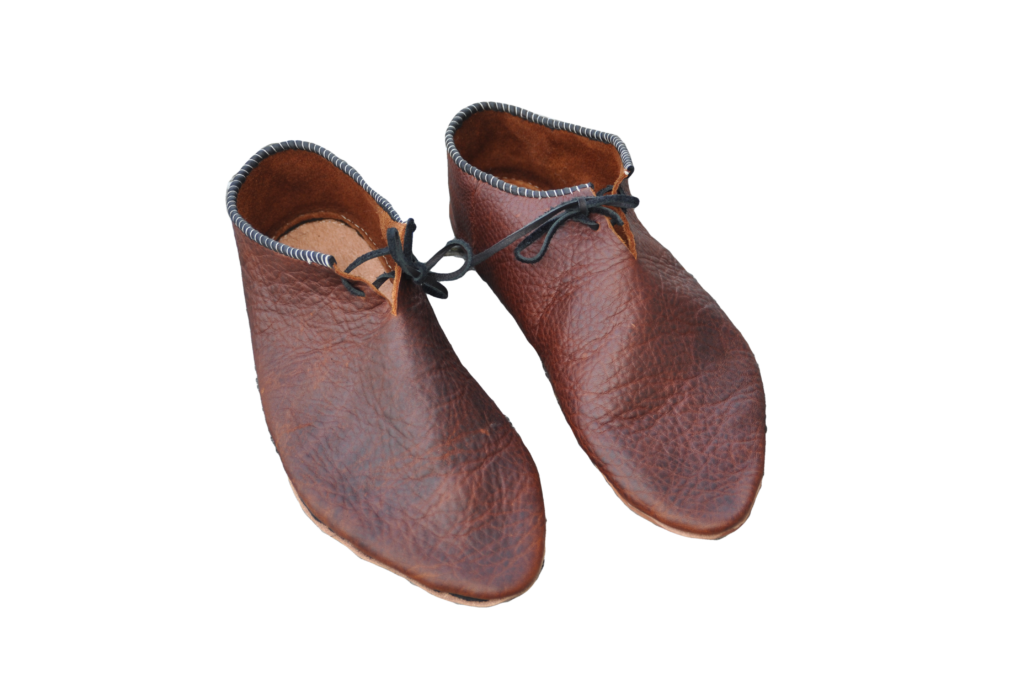 Most, perhaps the vast majority, of mid-period shoes had rands, which are a strip of leather between the sole and the upper. Sometimes rands run the entire perimeter of the shoe, but other times they appear only in certain parts, such as the heel.

According to modern authors, rands are triangular in cross-section. However, it's not clear whether the leather strip has been skived (cut at an angle), beaten flat on one side, or has simply been compressed during turning and wear.

Furthermore, modern authors suggest that rands help form a seal to keep out water. This pair of shoes will test that hypothesis by having one with a rand and one without. I shall walk through wet grass and/or shallow standing water to learn whether or not a rand helps keep water out of the shoe.

The rand used in this experiment is Tandy deer lace, 4mm wide.

Aside from rands, this pair of shoes will be use linen bookbinding thread, to test whether it's strong enough to pull tight when joining soles to uppers. (When Googling for 'strong linen thread' bookbinding linen appeared as a result.)

Two other aspects of shoe making will also be tested: making a self-mold (all projects to-date have relied on one person tracing and duct-taping another person's foot), and dampening the sole while stitching it to the uppers (it may or may not be easier to work with when damp).

Rand: holding this in place and stitching it requires significantly more dexterity, as well as force to push an awl through it. Next time I will use a wider strip of leather because that will require less precision in aligning it, and therefore speed the process. It may be necessary to trim it afterward, though, in order to make it look good.

As for stopping water: test #1 in wet grass, the rand seemed to make no difference; my socks both became wet to the same level, as far as I could determine by feel and by weighing them.

Conclusion: the rand makes no difference in terms of water ingress into the shoe. However, it's possible that my rand not being triangular in cross-section matters. Perhaps, also, my stitches are not tight enough to matter. This little test should not be considered conclusive as to the rand's effectiveness.

Bookbinding thread: definitely stronger (and much more expensive) than the linen thread I had been using, but it still broke once or twice. Note that I did wax it before sewing with it. Probably cheaper to buy in bulk rather than in a little package from Amazon.

Self-molding: worked very well indeed; one needs to be somewhat flexible to draw and tape one's foot. My tracing, duct taping, and resulting mold worked well and I will make more shoes from it.

Dampening sole leather: seemed to make no difference in ease or workability with regard to penetrating with an awl, or with stitching.