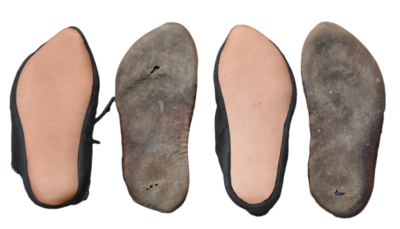 At times the two professions were at loggerheads:

The cobblers in particular caused much trouble through their tendency to add new leather to old shoes and sell them as new. The rightful role of a cobbler in the Middle Ages was to buy up old shoes, repair them and sell them second-hand to the poor. The question which plagued the minds of the Cordwainers, and the Lord Mayor's Court to which they took their innumerable quarrels, was much the same as that which plagues the antique expert today - where to draw the line between restoration and renewal? An antique is only an antique if it has not been restored with so much material that there is nothing recognisable left of the old. Conversely, a pair of old shoes to which had been added enough of new leather to give them a fresh appearance by the cobbler, was not the same article as a brand new pair made by a cordwainer. Throughout the thirteenth and fourteenth centuries the cordwainers were at pains to stop the cobblers undercutting them with their counterfeit ware, and from time to time succeeded. (Laing, 1980: 35)

On this occasion (1395) the Mayor ordered twelve workers of new leather and twelve workers of old leather to hold an enquiry for the settlement of their dispute. On August 14th, 1395, an agreement was drawn up after this form, that is to say :- "That no person who meddles with old shoes shall meddle with new shoes to sell; and that every manner of work that may be of new leather belongs to the new workers, without any meddling with any old work to sell. And in the same manner, the old workers shall not work upon anything but old leather for sale, on pain of forfeiting such work; excepting mending old boots and shoes, that is to say, in quareling before and behind, clouting and pecyng, and ryvetting and lyning; in doing the which, they may take new leather or old, whichever shall be best for the common profit." (Mander, 1931: 54)

In 1409 it was again necessary to clarify the roles of cordwainer vs. cobbler:

And in the same manner, all the work that may be made of new leather belongs to the workers in new leather, called 'Cordewaners,' without making up or mixing any quarter of old leather with a quarter of new leather, either sole or overlether, before or behind; except always, and reserved unto the said Cordewaners, and their successors, that if it shall happen that any person desires to have his old boots or bootlets resoled, or vamped and soled, or his galoches or shoes resoled, the same, if it can be done, shall pertain at all times to the said workers called 'Cordewaners,' to do it; or if any new shoe shall be burnt or broken, and require to be mended with a quarter of new leather, either as to sole or overleather, before or behind, it shall pertain to the said workers in new leather to do it, they taking reasonably for the same. And that no one of the craft aforesaid, either worker in old leather or worker in new leather, shall do any work, otherwise than in manner and form declared as aforesaid. (Mander, 1931: 55-56)

As a point of general interest, it should be noted that some cordwainers could be quite thrifty when constructing shoes. They would often use relatively small pieces of leather to complete a shoe when they lacked pieces of leather large enough to fit the entire pattern for the upper portion. Archaeologists call these pieces inserts today and apparently medieval shoemakers often found it worth their time to use these bits.

*The English word cordwainer comes from shoemakers being associated with a certain kind of supple goatskin leather imported from Córdoba, Spain, even long after the source of it dried up.

See also: repairing a shoe with a clump sole.